How to Make a Film With Your Kids!

You’ve exhausted the kid’s section on Netflix, put together every jigsaw, painted everything under the sun, you’ve even clocked up enough minutes playing back garden football to warrant an invitation to play for the national team. By now you might be struggling to find new ways to keep the little ones entertained during lockdown. We hear you. Luckily, we have a suggestion that’s both cheap and cheerful and doesn’t require stepping outside the front door – make a film with your kids!

We’re not talking about a 10-second TikTok video of the kids shuffling up and down the stairs here, but a short film with pre and post-production. It’s educational, creative, fun, and what’s more you’re left with a cherished memory that you can watch back and embarrass the kids with for years to come. In this article we’re going to show you how to plan, shoot, and edit your film with your kids and who knows, you might learn a thing or two yourself!

What you will need

How to create a story 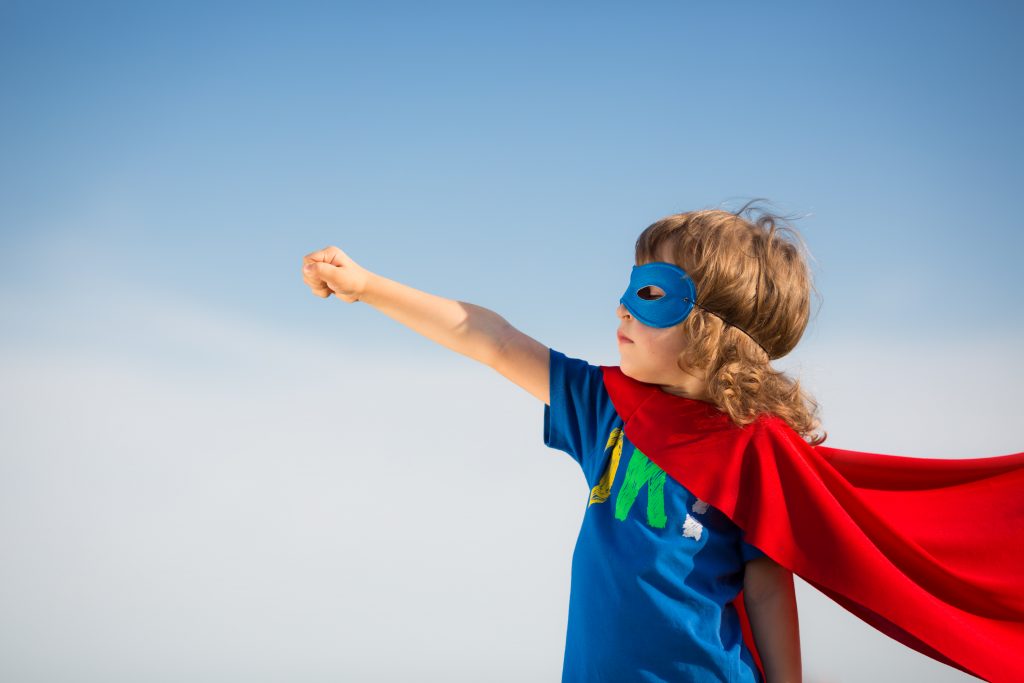 Once you have your basic idea or concept down, it’s time to plan the structure of your film. This sounds like a daunting task, but film plots generally follow the same basic story structure that’s been used time and time again. It goes as follows:

If your story is about a great football player, the set up could be the World Cup Final and your kid is the star player. If it’s superheroes you’ve opted for, you can establish that your kid is the greatest hero around by saving a few stuffed animals from the perils of the washing machine. You get the idea, whatever your child has decided upon, the opening act should establish their character of choice so we know what to expect from them in the next act –

No good story is complete without some sort of confrontation, the bit in the film that’s often the most entertaining part, so let your imaginations run wild. Maybe the villain (who you could play – let’s face it you’d make a great villain) has stolen all the sweets from the fridge, or your kid’s team find themselves 3-0 nil down at halftime in the World Cup final. Whatever your story is, the middle act should contain some sort of obstacle that must be overcome in order to bring us to act three –

Time to bring around that happy ending that resolves the whole story. Perhaps the villain learns the error of their ways and returns all the sweets to the fridge for everyone to enjoy again. Or maybe your child is a tad more ruthless and slays the villain after an epic duel in the back garden. Things don’t have to be airtight to make sense, you may notice plot holes and loose ends here and there, but save them for 20 years down the line, then you can go full Mark Kermode and criticise all you want. 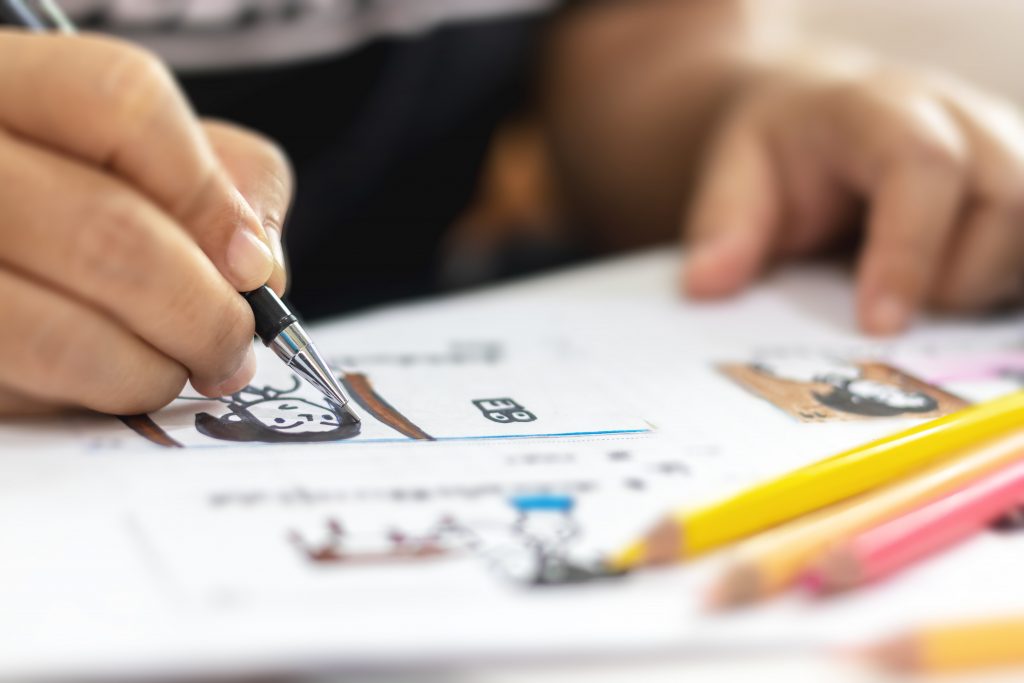 You’ve decided your genre, your story, your characters – now get it on paper. A storyboard is a graphic representation of how the story will unfold, so this is arts and crafts time. You don’t have to have every frame of your film laid out shot by shot, one or two drawings per scene is more than enough to get an idea of what you or your kids will need to shoot.

This is also the right time to let your kids think about what their characters will be saying in each scene – again just a rough idea will suffice as you’ll need to shoot each scene more than once!

Even the greatest actors rarely get it right on the first take. Jot down a few lines of script for each scene, they could even be speech bubbles on your storyboard – your kids don’t have to sit and memorise line after line, in fact you’ll produce a more endearing film if you let your kids improvise a bit in each scene.

Once all of that is out of the way, it’s time to think about costumes and scenery. Your child will probably have a very definite idea of how they would like to appear in their film, encourage this! Let them create their own costume. If they’re unsure, search around Google Images together until they find a costume idea that they like. Steal ideas from multiple sources – in essence, that’s what production design is all about

For scenery, make the most of your location. Do a recce around the house and pick out locations that would suit each scene. If you have old bed sheets lying around the house, draw a city skyline on them, or whatever kind of background you need, and use them as a backdrop in scenes. 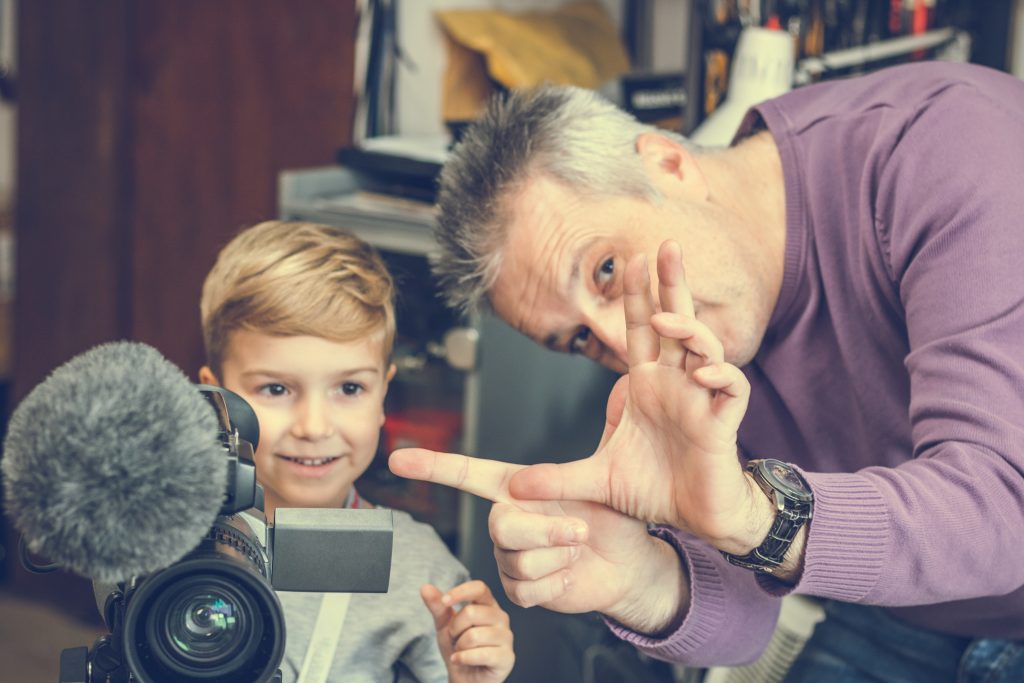 Now for the bit you’ve all been looking forward to the most – shooting the film, or as we say in the biz, production. Below are a few points to consider before you get the camera rolling:

Consider the light when filming. It’s best to take advantage of any daylight for filming – basic smartphone cameras struggle in the dark or when there’s very little natural light. For any scenes shot indoors, it might help to turn on your phone’s torch to brighten up those faces! If you’re filming while facing a window, the light pouring in from the window is going to play havoc with your camera leaving black silhouettes instead of seeing all those wonderful performances.

You’ll need a good camera operator with a steady (or steady enough) hand. Many of the latest smartphones have motion stabilisation built into them so a little shakiness should go unnoticed. If there aren’t enough hands around, prop the camera up using whatever works and please, for all that is holy in this world, hold your camera horizontally – not only does it look better, but it adds to that cinematic quality you’re looking for.

With the aid of your storyboards, begin shooting your film in chronological order to keep things neat and tidy. Make sure you shoot each scene multiple times so when it’s time for editing, you have plenty to work with. It’s also a good idea to announce which scene it is you’re recording and which take it is – we’re all familiar with clapperboards and someone announcing “Scene 2: Take 3” before slamming it down in front of the camera before each take. By doing this, you’re making life a lot easier for yourself when it comes to editing by clearly labelling each recording.

If a part of your film requires a few scenes in the back garden but the weather has spoiled those plans, break away from shooting in order and capture all the indoor scenes first, tomorrow’s another day. This is a technique commonly used in professional filmmaking to cut down on the unnecessary cost of moving back and forth between the same locations.

Once you’ve filmed a scene, review your recordings or rushes as they’re professionally known, sometimes dailies. It’s a great idea to show your kids their performance after each scene, it might inspire them to press on or at the very least, you might get a good laugh out of it together. 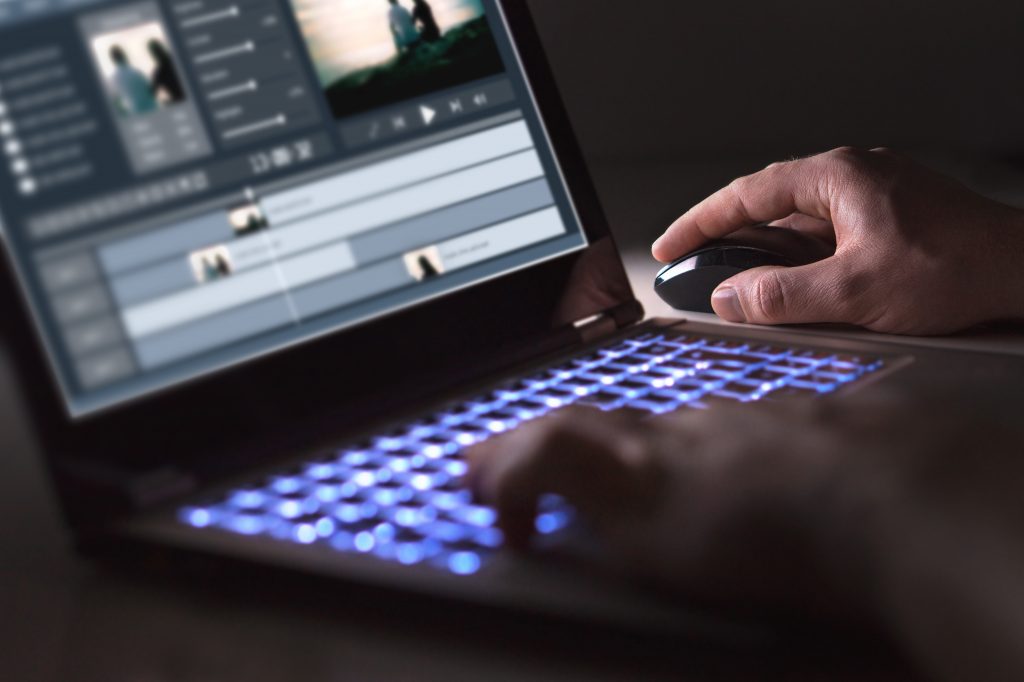 Once you’ve shot the beginning, middle, and end of your film, it’s time to edit. It’s often the slowest process of filmmaking but also the most rewarding. Here’s a great way to think about editing from the late great Phillp Seymour Hoffman:

So let’s make a great cake shall we? Here’s a few editing softwares you can use to piece your film together:

If you’re completely unfamiliar with how editing software works, there are plenty of tutorials to help you online, but these days the UX of these editing suites are extremely intuitive that your child might figure it out before you do!

Upload your recordings to the editing suite, let your kids decide which version of each scene they prefer best, and simply drag it and drop it on to your timeline. There are tools available on these editing suites to trim a few seconds here and there off of each recording in case every one of your recordings starts with a big loud ACTION and finishes with an even louder CUT!

Once you’ve placed all the scenes in order on your timeline, you essentially have your film made – but we don’t want to just stop there, we can add one or two more things to really create that cinematic feel.

Most editing suites will provide space on your timeline to add some audio to be played underneath your recordings. Music is a great tool to use in between scenes where there may not be any dialogue, or to add some tension during any dramatic moments.

Legally, you shouldn’t be adding music that you don’t have the copyright for or permission to use, but if you don’t intend to publicly broadcast your film, this shouldn’t be an issue. Do bear in mind that uploading your film to Facebook, YouTube or any other online public platform technically counts as broadcasting (even if you only have 20 friends and they’re all family). The last thing we want is the social media copyright police disabling the audio on your film for copyright infringement.

Luckily, there are places out there where you can get copyright-free music to use in your film. Check out bensound.com for free audio tracks to download and use in any way you want

If you want to make a “bang” with your film, it might be cool to add a few sound effects here and there. Similar to music, most editing suites will provide enough audio tracks to add sound effects as well. There are plenty of free sound effects to be found at soundbible.com, with everything from laughing audiences to airplanes landing. Simply download your chosen sound effect and drag it and drop it on to your timeline. 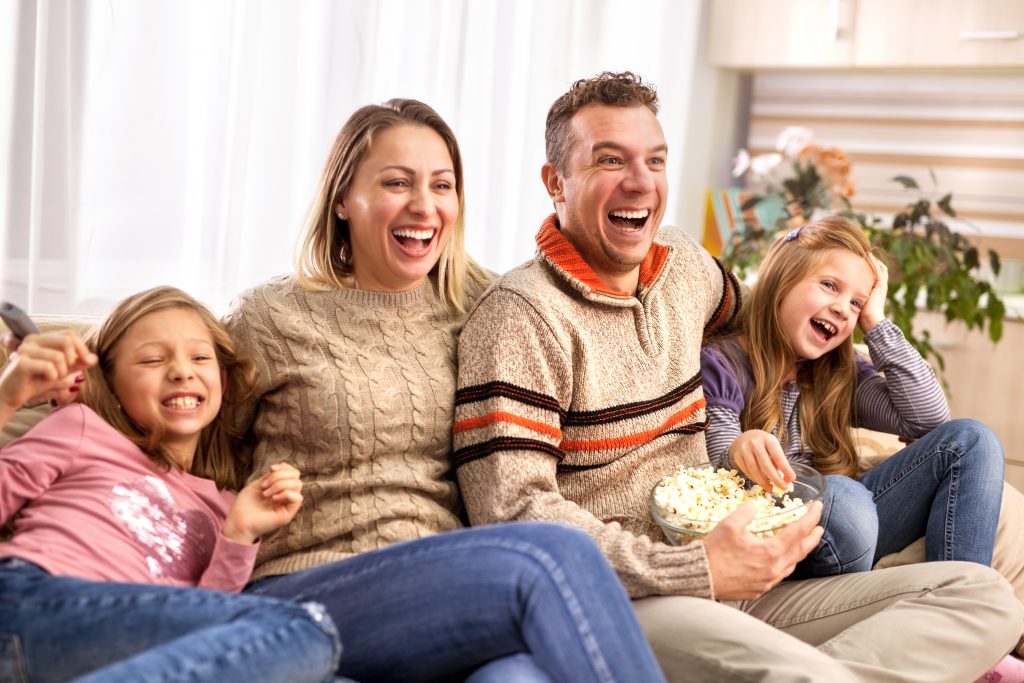 Once you have a version of the film you’re happy with, just export or download it, and there you have it, a treasured memory that will last a lifetime. If you decide to upload your film, be sure to tag us! We’d love to see what you create, we might even steal one or two good ideas from you…

10 Internal Communications Videos for Returning to the Office

What is the new normal? As European economies open back up, most companies are attempting …